If you ever feel as though your well of inspiration has dried up, or perhaps that pesky muse has indeed fled, I challenge you to spend five minutes on Pinterest. (And I’m betting you can’t spend JUST five.) Even if you don’t consider yourself crafty in any way, I GUARANTEE there’s something on this site for you.

That being said, I’ve been a little quiet on the web during the holidays because I decided to take a dose of my own advice, and have buried myself in the creative projects I’ve been dying to get around to for months. I kicked excuses to the curb and cranked out quite a few groovy little projects in between all the family gatherings, day trips and gorging.

Since I’m still stretching my writing muscles (which have been hibernating over the past few weeks as I stuffed myself silly with all my holiday favorites), I figured I’d share one of my simpler projects first – to warm up, as it were.

My hubs has been a driving force behind me returning to my crafty roots. We’ve been in our new house for almost a year and a half, and while I was a driving force in making it our own when we first moved in, I’ve been a little lax these past few months in finishing up the décor in some of the rooms. One of the things especially lacking has been artwork for the walls, which brings us to my first Pinterest project – the criss cross wall art you see below. 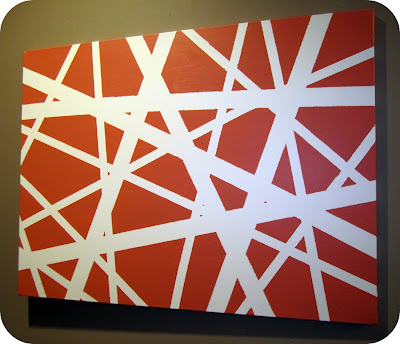 The example project you see above, I found on Pinterest and tracked back to the blog “Living in the Woods.” Taylor does a great job of explaining the process, and has included some step-by-step photos should you decide to try something similar, so instead of walking through the entire process myself, I’m just going to tackle some of the differences between her approach and mine.

The finished project is what you see below. Now the hubs and I just need to agree on a place to hang it!

I’ve finally decided where to hang this! It’s going in my dining room (see photo below). And I’m already working on a new project for my kitchen.  I can’t wait to show off what I’ve come up with! Stay tuned!

Geek Chic: Across the 8th Dimension

A fire sign, I tend to be someone who acts impulsively. My muses, quite feisty, never rests. I get things done at her behest.